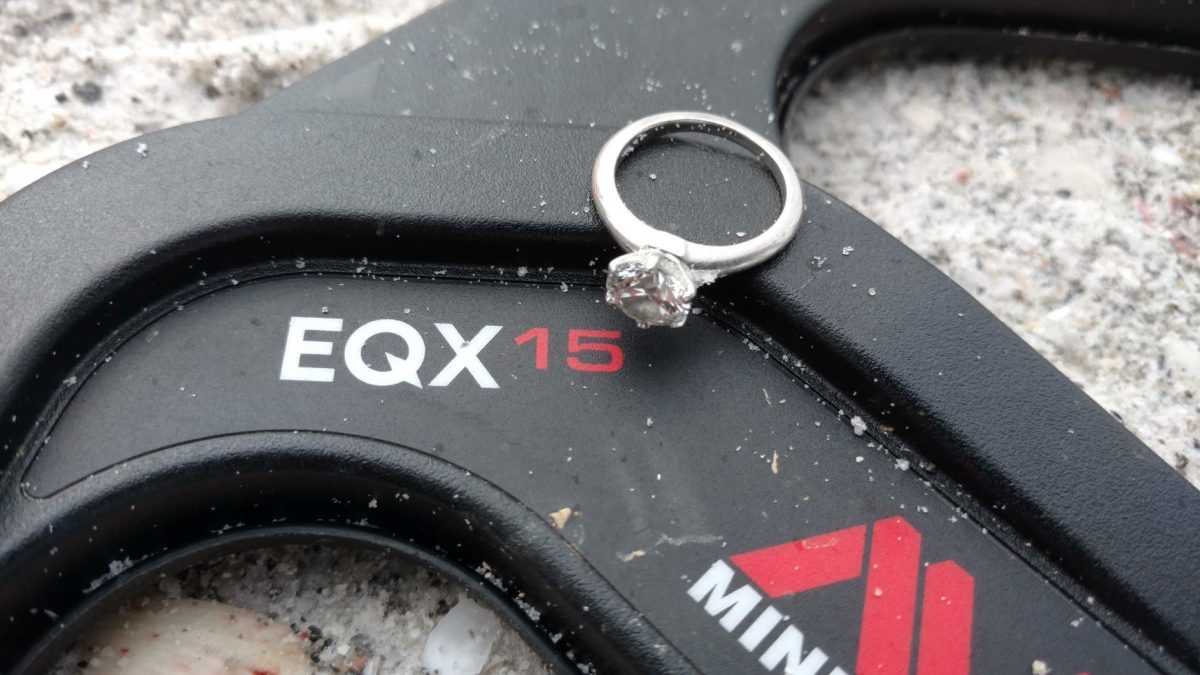 Jamie and Matt came down to Longboat Key for a one-week vacation with the whole family to get away from the bitter cold in New York and Washington DC. When they arrived, they went out onto the beach to join Mom, Dad, and siblings. Jamie took off her wedding set, put the rings into her shirt pocket and proceeded to lather up the kids with suntan lotion. When done, the started walking down the beach looking for shells.

Apparently as she bent over to pick up shells or to pick up the kids the rings fell out of her shirt pocket. At some point later in the day she remembered her rings were in her pocket, but when she reached for them, they were gone. Her heart sank and she called out to her family that her rings were missing. They searched but had no luck. Later that afternoon Matt found SRARC on the Ring Finders site.

A meeting time for the next morning was arranged and Paul Hill, Ed Osmar, and Mike Miller showed up to search. They were told the just before they arrived one of the rings had been found by Jamie’s brother-in-law, but the engagement ring was still missing. After listening to what had happened and going to the area where the ring had been found a search began. After covering the area around where the one ring had been found the group divided the beach into 3 sections and proceeded to hunt those areas. When Paul got done in his area, he returned to an area close to where the first ring had been found. Sure, enough in a few minutes he got the signal and out came the beautiful engagement ring. We spent just under an hour searching and the payoff was outstanding. We got lots of cheering and a boat load of smiles. Now the whole family and relax for a week in the sun without worrying about the lost rings.

Rick and his wife Dale had pulled their boat up to a sand bar near Jewfish Island and were enjoying the ankle-deep water and tossing a football. Suddenly Dale realized that her diamond wedding ring that Rick have placed on her finger 17 years ago was missing. They immediately started feeling through the sand and got everyone nearby to help but to no avail the ring was not found.
Later that evening Rick found The Ringfinder website and contacted Tom Jones. Tom sent out a request for hunters to meet Rick at the nearby boat ramp. Tom Jones and Mike Miller met Rick and went out to the sandbar. Once anchored up Rick walked over to a navigational sign and started counting his steps back toward the boat. After 25 steps or so he stopped and said, “it’s right here in this area” while swinging his arms in a circular motion. Mike started hunting from that spot while Tom was asking Rick the normal questions like which way was she facing, is she right or left handed, did she fall. Mike interrupted with the question. ”What does it look like?” as he pulled the ring out of his scoop.
Rick immediately called Dale to give her the good news that her precious lost ring was found. 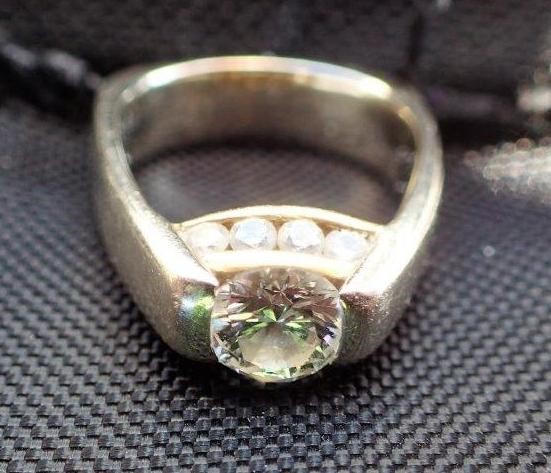 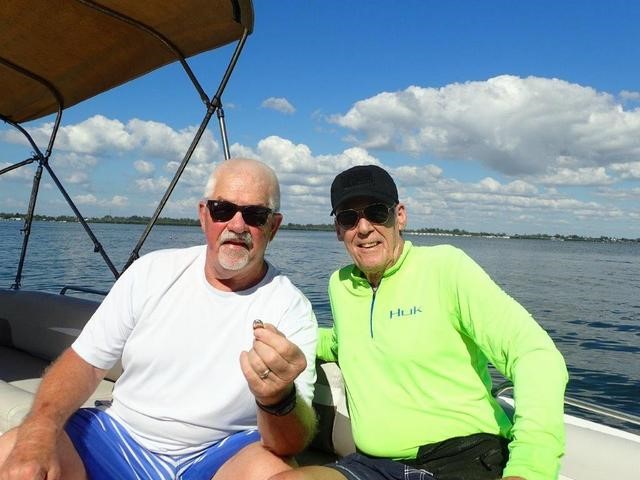 I met Laurel, the owner of Island Style Watersports and professional kayak guide at Ted Sterling Park to look for a ring her client lost the day before. According to Laurel, she was guiding a family through a mangrove tunnel when the husband’s kayak overturned.  He didn’t realize his wedding band was gone until returning to land, but Laurel was certain it came off as his hand was grabbing at overhead branches in an attempt to stay on the kayak. It turned out she was right and a few minutes later we were looking at a large white gold band in a scoop full of oyster shells! 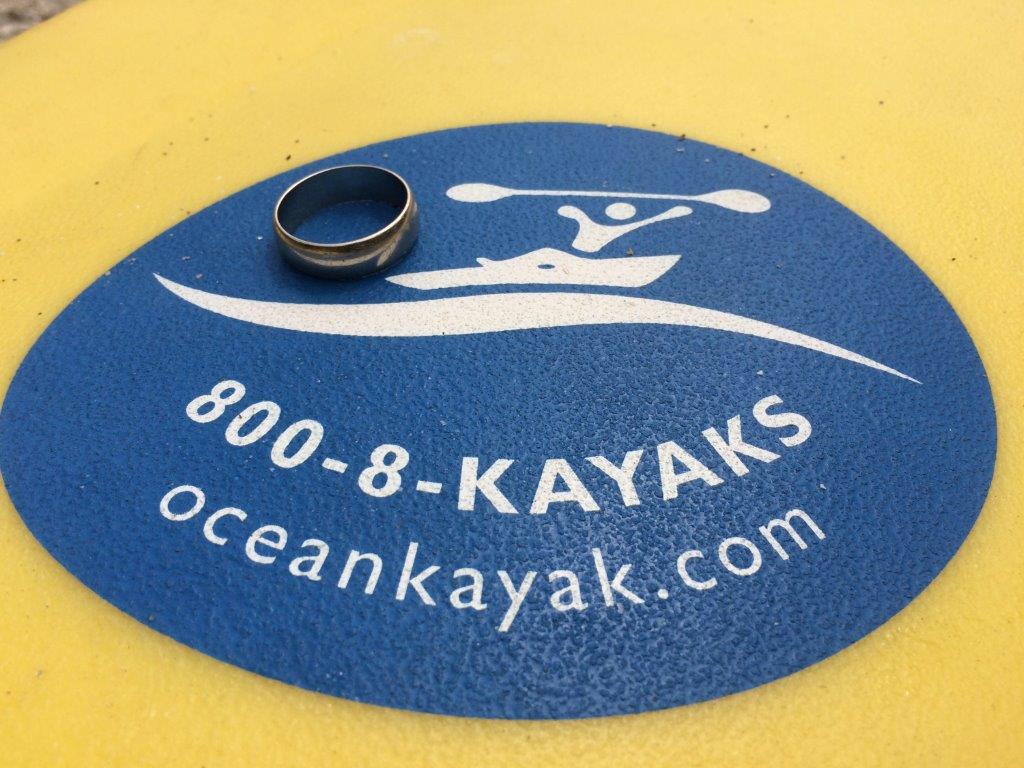 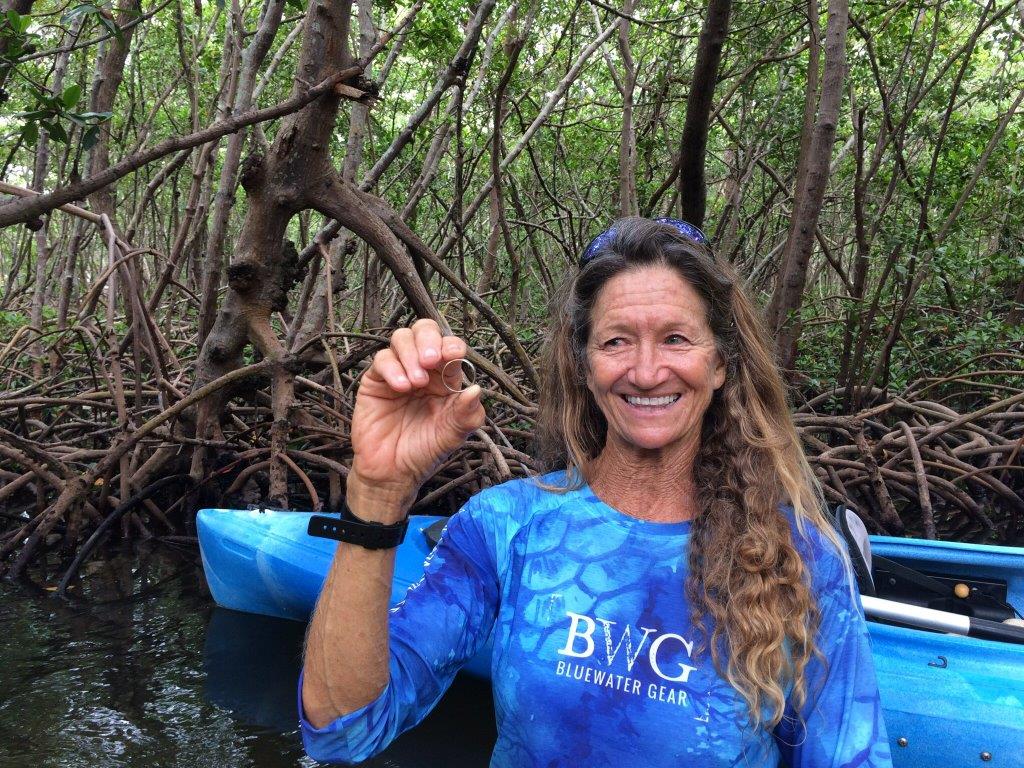 Dan and Sue were vacationing on Anna Marie Island over the Forth of July week with their kids. They were having a great time until Thursday evening when Dan was in about 3 feet of water with the kids and was trying to feel for shells in the sand. As he lifted his hand from the sand he felt his wedding ring slipping off his finger. He quickly pushed his hand back to the sand to try and trap the ring but it flew off before he could save it. The whole family frantically searched for the ring and other beach goers joined in to where they had 12 people looking at one point. They couldn’t find it and returned to their room that night and tried to think what could be done to get the ring back. Eventually Dan found Ring Finders on the internet and contacted Howard Metts. Howard put out an email to the club hunters and Mike Miller responded that he happened to be in the area and could meet them at the beach right away. After hunting for about an hour Mike got the good signal and called Dan and Sue over. He said I think this is it. It sounds really good but just in case I’m wrong, when I dig, it could also be a pull tab so don’t be disappointed. Mike dug and shook the sand out or the scoop and caught a glimpse of gold. He moved the scoop over to Dan and said “I think I see gold in there” Dan looked and saw nothing. Mike said “dig around in the shells a little bit”. Dan started digging and instantly found his lost wedding ring. Both Dan and Sue are overjoyed to have his ring back. It was solid smiles all around with the whole family. 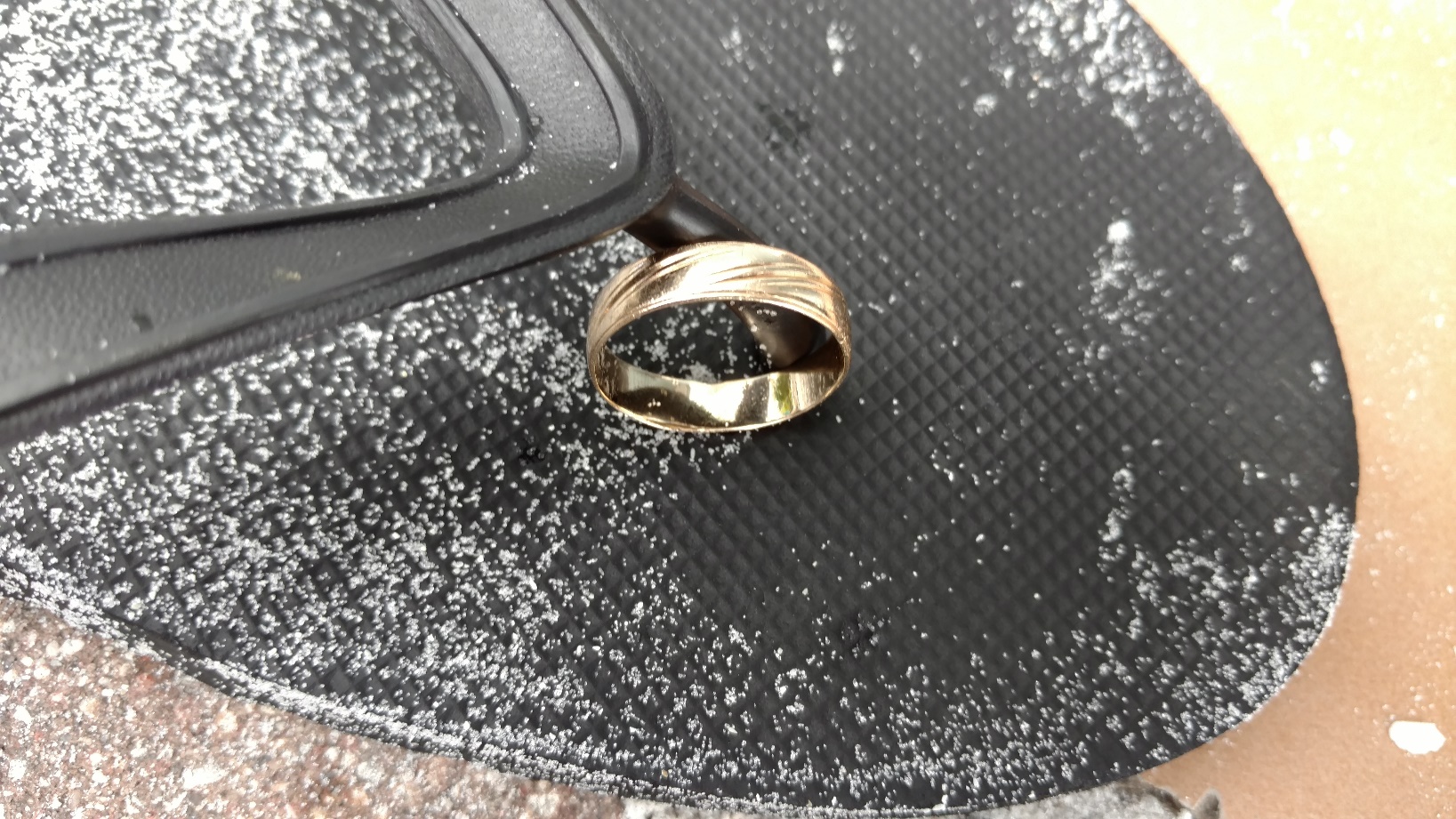 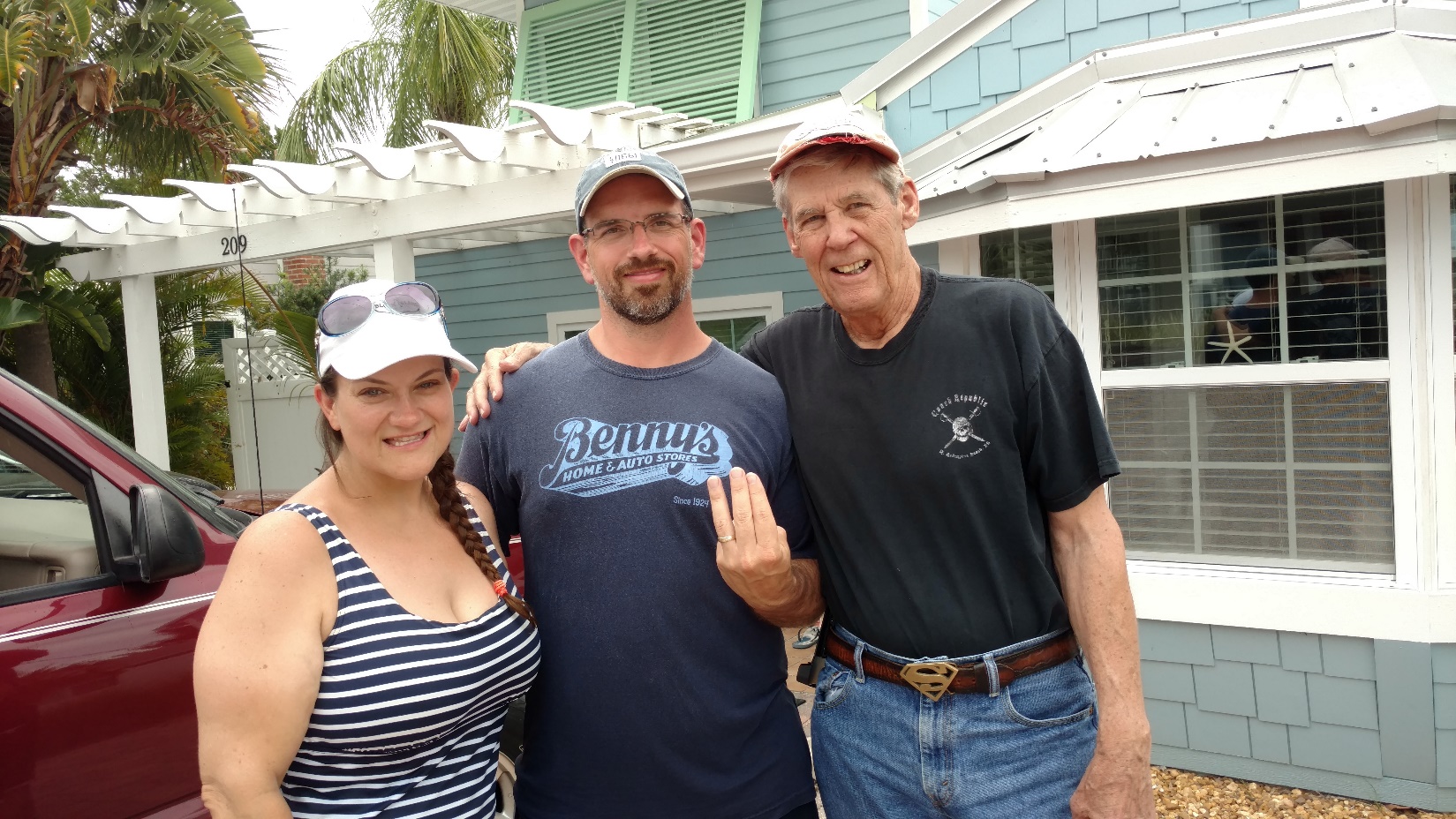 Alec was at the beach with family and decided to take a swim and sit down out in the ocean on a shallow area when along came a wave from behind that knocked in to him and pulled his ring off his finger. The entire family came out to help Alec look for his ring. They searched for some time and were amazed how quickly it could disappear and figured it was lost forever. Alec made some mental notes on where he was and googled lost ring and metal detectors on line and came across the SRARC website where he got in contact with Stan Flack. Stan quickly sent out some text to find a team member to try and find Alec’s ring. After some searching, team member Jim Thobe answered the call and agreed to meet Alec at the beach a few days later. Jim searched for a long time and finally was able to scoop and recover the ring from the depths of ocean. An amazed and excited Alec, was all smiles. Great work Jim.