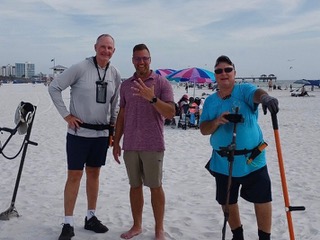 Bill was enjoying Clearwater Beach with a group of his coworkers. After spilling a drink on his hands, they became sticky and sand got under his wedding band. He removed it to wash his hands and didn’t realize until much later that he no longer had the ring with him! After returning to the site and raking through the sand with no luck, he turned to the internet to look into renting a metal detector. While he was searching, he discovered SRARC. He got in touch with club president Howard Metts, who put out a notice to the club’s Ringfinder members. Rob Clarke and Mike Shuler arranged to meet Bill at the spot where he remembered setting down his ring. Rob and Mike started gridding the area, and in less than 10 minutes, Bill was reunited with his ring!