Austin and his mother were visiting his brother in Florida from Flint, Michigan. They all went to Pass A Grille and set up a canopy near the water for a fun day at the beach. Shortly after arriving they went into the water and as they enjoyed the warm gulf water temperature, Austin sat down in about neck deep water. As he was sitting he felt a shell in the sand, picked it up and threw it toward the shore. As the shell headed to shore so did Austin’s precious ruby ring. They all searched for hours but with no luck.

For Austin’s 18th birthday just last July his grandmother gave him the ring as a birthday present. Not only is the ring significant in his families history it is also Austin’s birthstone. The ring is approximately 61 years old.

About 8 days after he lost it, Austin found SRARC Ring Finders and contacted Tom Jones. A hunt date was established and Paul Hill, Ed Osmar, Dimitur Alipiev, Mark Sillence, Howard Metts, Jeffery Miller, Mike Miller, and Bill Gallant showed up for the hunt. 13 minutes later Bill held up the ring and said “I think I found it”. Awesome job Bill and a big “Thank You” to all who helped on this recovery. SRARC is very happy to have been a part in returning this important piece of history to Austin’s family. 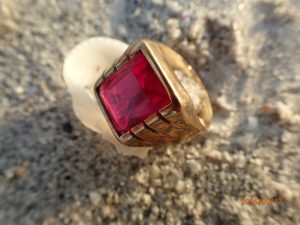 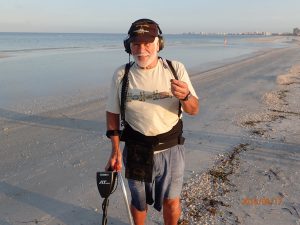