Anna Maria and her husband got into a small argument one evening about a month ago. Her husband decided to leave the apartment for a while to let things cool down. He made a last comment as he was walking away and it turned out to be the last straw for Anna Maria. She took off her three rings and threw them in his direction. It was dark so she waited until the next morning to look for them but had no luck. Over the next month she kept looking but never could find them. On the day of their 4 year anniversary she was feeling really sad about her lost rings and she decided to see if she could get some help. She googled lost rings and up popped SRARC. She called Mike and he tried to see if he could schedule a hunt for later in the week as it was raining cats and dogs. She really wanted to see if they could be found on her anniversary day and really wanted someone to come right away.

Mike headed out thinking he was going to get soaked but couldn’t turn her down. When he arrived the rain had stopped but Anna Maria was gone so he called her and got the location where she thought the rings (3) would be. It was in an area that was almost all hedge. He worked over the tops and underneath after shaking each bush. He moved away from the initial area and instantly eyeballed the engagement ring setting in the dirt in plain sight, probably uncovered by the rain. Along side the dirt area were more hedges and also a short strip of grass. After working over the hedges, he started on the grass. In a few moments the promise claddagh ring showed up hidden under the grass. Further searching sadly did not uncover the lost wedding ring. What fun it was to return two of her rings and see the smiles on Anna Maria, her husband, and her mothers faces. Mike will be returning tomorrow to spend a little more time to see if he can find the remaining missing ring. SRARC would like to wish Anna Maria and her husband a very happy anniversary. Two out of Three is not bad!!!!!!!! 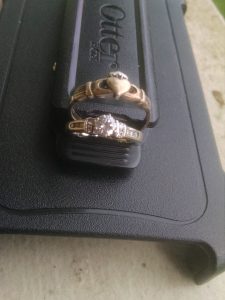 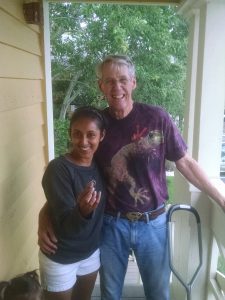